Phase contrast and differential interference contrast (DIC) should be considered as complementary (rather than competing) techniques, and employed together to fully investigate specimen optical properties, dynamics, and morphology. In many cases, each technique will reveal specific details about a particular specimen that is not apparent from observing images captured by other methods. The wide variety of images presented in this gallery are derived from both thick and thin transparent specimens, as well as specimens that have inherent contrast originating from synthetic dyes (stains) or natural pigments. 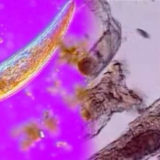 Members of the jellyfish in the class Scyphozoa undergo a complex life cycle including a larval medusa or ephyra stage. The genus Aurelia demonstrates the typical life stages for this class of invertebrates, which also includes the free-swimming planula, the stalked and tentacled scyphistoma polyp, the strobila bud, and the mature medusa stages.

Blue-green algae growing in natural environments may be composed of numerous species. Because some of them may contain harmful toxins, Spirulina that is intended for human consumption is generally harvested from controlled ponds. In the last few decades, commercial Spirulina systems have developed in many countries, including the United States, Thailand, Taiwan, Japan, Mexico, China, and India.

The human body constantly sheds cheek, or squamous epithelial, cells. Samples can be easily obtained by swabbing the inside of the mouth and are, therefore, often used in school laboratory settings. Scientists also frequently examine cheek cells since they contain human DNA and may hold clues that enable the early diagnosis of certain health conditions.

Clubroot is a disease caused by the fungus Plasmodiophora brassicae, which affects cabbages and other closely related crops. Early signs of clubroot include a yellowing of leaves and a tendency to wilt, but a characteristic swelling of the roots is the primary symptom of the condition.

The Ancient Egyptians considered cats sacred animals and were the first to domesticate the predators, most likely to control rodent populations around granaries. Though they generally no longer hold a religious status, cats can be found in more homes than ever before. Cats reach a maturity level that allows breeding sometime between seven and twelve months of age. Unlike their wild brethren, cats can have multiple litters in a single year.

Composed of many layers, the retina of humans and most vertebrates contains a stratum of rods and cones, the photosensitive cells of the eye. Rods are elongate and are responsible for perceiving the basics of a visual image, such as size, shape, and intensity. Cones, on the other hand, are shorter than rods and can perceive color and subtle detail. They are also less sensitive to light than rod cells and are significantly less numerous.

Tolypothrix is a genus of cyanobacteria that occurs in small tufts either floating in torpid water or attached to plants and rocks. Cyanobacteria are the oldest known fossils, dating back over three and a half billion years.

The principal purpose of scales is to give fish external protection, but not all fish species have them. However, those that do may be covered in scales of various shapes, sizes, and types. The primary categories of fish scales are placoid, cosmoid, ganoid, cycloid and ctenoid scales.

Diatoms are unicellular algae that inhabit both fresh and salt water, sometimes living together in colonies. Typically classified as members of the phylum Bacillariophyta, the estimated 16,000 species of diatoms that exist compose an important link in the aquatic food chain.

Adipose tissue is a connective tissue that specializes in the synthesis and storage of fat reserves. In mammals, adipose tissue exists in both a brown and a white form, each serving different bodily needs.

A genus of fern, Polypodium plants are most often found in the New World. The plants grow above ground, but are usually supported by another object and are frequently seen growing from rocks and tree trunks.

The breeding behavior of frogs is one of their most distinctive characteristics. The annual occurrence takes place in freshwater, usually in still or slow-moving areas. Some species, however, have adapted sexual organs, such as enlarged testes that produce massive amounts of sperm, that enable fertilization to take place in rapidly flowing waters.

The giant leopard is one of the most eye-catching moth species. With large white wings covered in blue or black spots, the giant leopard moth soars through the night skies of eastern North America. Exclusively nocturnal, the adults feature ultrasound-sensitive ears, which offer protection against bats, as well from terrestrial predators.

HeLa cells have been cultured continuously for scientific use since they were first taken from the tumor of a woman suffering from cervical cancer in the 1950s. They have been utilized for many purposes, including the development of a polio vaccine, the pursuit of a cure for diseases such as leukemia and cancer, and the study of the cellular effects of drugs and radiation.

Actinophrys sol is a fresh-water species of heliozoa frequently referred to as the sun animalcule. The name spawns from the numerous radiating pseudopodia that surround the spherical organism, which give it a sun-like appearance under the microscope.

Blood is essential to human life, delivering vital elements and removing harmful wastes during its cycle throughout the body. All human blood is composed of the same basic elements, but antigens on the surface of red blood cells produce differences in blood types. When discordant types of blood are mixed within the body, the reaction can be fatal.

When tissue is prepared for microscopy, the cells shrink and pull apart from each other, but remain attached to neighboring cell membranes via desmosomes. The intercellular bridges that can sometimes be observed are actually tiny extensions of cytoplasm connected to the desmosomes.

The amphioxus is a small, slender fish-like organism that spends the majority of its time buried in gravel or mud on the ocean floor. Sometimes alternatively referred to as lancelets, the marine animals rarely grow longer than a few inches long and are most often found around the coasts of warm regions of the world.

The classification of lichens has been tremendously problematic for taxonomists. Once thought to be a single organism, microscopy revealed that lichens are a structure composed from a symbiotic relationship between two distinct organisms, fungi and algae. Although each individual species can flourish independently, in certain harsh environments they must work together in a mutually beneficial relationship in order to endure.

Mice are not a distinct species or group of animals. The term is commonly applied to small rat-like rodents in a number of families, but most species are members of Muridae. The intestines of mice are similar to those of most vertebrates, primarily absorbing water and electrolytes from digestive residues and storing fecal matter.

The kidney is an organ that maintains water balance and expels metabolic wastes in vertebrates and some invertebrates. Primitive and embryonic kidneys have sets of specialized tubules that empty into two collecting ducts that pass urine into a primitive bladder. The more advanced mammalian kidney is a paired compact organ with functional units, called nephrons, that filter the blood, reabsorbing water and nutrients and secreting wastes, producing the final urine.

Cells are the basic building blocks of all living organisms. While describing plant tissues in 1665, Robert Hooke first coined the term because the cellulose walls of cork that he was able to see through his microscope reminded him of the cells inhabited by monks. The images presented below compare a thin section of animal tissue stained for the nucleic acids RNA and DNA.

Obelia is the primary genus of widely distributed animals belonging to the phylum Cnidiria. Members of Obelia must complete two generations, each with its own form and set of behaviors, in order to finish a single life cycle.

Amphiumas are a genus of aquatic salamanders that spend the majority of their lives burrowed in mud and debris. Due to the extremely small size of their limbs, the creatures are frequently mistaken for snakes or eels from a distance.

The filamentous algae genus Spirogyra owes its name to the characteristic spiral shape of the chloroplasts possessed by its members. Sometimes alternatively known as water-silk, mermaid's tresses, or pond scum, a large presence of the unbranched algae often indicates the nutrient enrichment of freshwater bodies.

Acorus is the only genus in the plant family Acoraceae and its members are commonly known as sweet flag. Humans have utilized the grass-like perennial plants that grow in wetlands and around freshwater bodies for thousands of years.

Echinococcus granulosus is a tapeworm parasite that in its larval form can cause hydatid disease, which is characterized by cysts forming within the victim's body. In order to complete its lifecycle, the tapeworm must infect two hosts, a carnivore and a herbivore.

The Tilia species are deciduous trees that grow in northern temperate climates and may live as long as 1,000 years and reach heights of up to 90 feet. Tilia americana, also known as the American basswood or linden, has a large round crown that makes the species an excellent shade tree on warm, sunny summer days.

On land, the mammal with the most teeth is the giant armadillo, which can have as many 100 teeth in its mouth. In water, the long-snouted spinner dolphin exceeds that number, possessing as many as 252 teeth in its long thin jaws. Humans have comparatively few, producing only 20 primary teeth and 32 permanent ones.

The vas deferens is part of the male reproductive system in mammals. Each of the pair of tubes possesses strong muscles that are utilized to transport sperm from the testes to the urethra.

Whipworms are intestinal parasites belonging to the genus Trichuris that infect mammalian hosts. The common name of the nematodes is based on the characteristic shape of the adult species.

A genus of filamentous freshwater algae, Zygnema features two stellate chloroplasts per cell. There are numerous species of Zygnema, which are distinguishable by the shape, size, and other characteristics of the zygospores they produce.