The widefield reflected light fluorescence microscope has been a fundamental tool for the examination of fluorescently labeled cells and tissues since the introduction of the dichromatic mirror in the late 1940s. Furthermore, advances in synthetic fluorophore design coupled to the vast array of commercially available primary and secondary antibodies have provided the biologist with a powerful arsenal in which to probe the minute structural details of living organisms with this technique. In the late twentieth century, the discovery and directed mutagenesis of fluorescent proteins added to the cadre of tools and created an avenue for scientists to probe the dynamics of living cells in culture. This gallery examines the fluorescence microscopy of both cells and tissues with a wide spectrum of fluorescent probes. 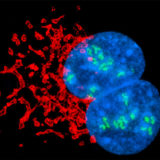 The fluorescence microscope provides an interesting window into the world of the cell and is one of the biologist's favorite tools for the examination of both living and fixed cells in culture. 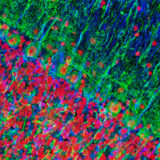 The humble rat has had an outsized impact on human history. In the Middle Ages, the black rat (Rattus rattus) was blamed for spreading the Black Plague through its fleas, a pandemic that killed a third of Europe's population, an estimated 34 million people. In modern times, however, a larger cousin, the Brown rat (Rattus norvegicus) has become an important model organism in biological research. Selective breeding of the Brown Rat has produced the albino laboratory rat. Rats grow quickly to sexual maturity and are easy to keep and breed in captivity.