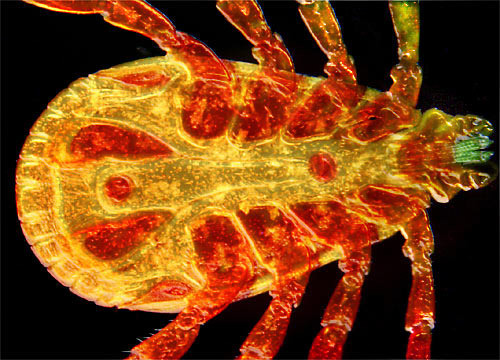 The brown dog tick has a three-host life cycle. When the larva hatches from its egg, it immediately seeks out the first host animal in the cycle to feed upon. After establishing itself on a host, the larva feeds until it is engorged (filled with blood), which usually requires 2 to 7 days. Once engorged, the larva abandons its host and begins to molt. Molting can take anywhere from 5 to 23 days, after which time the larva is referred to as a nymph. The nymph form again seeks out a host and repeats the process: it feeds, leaves the host, and molts a second time. From the second molting, the tick emerges as an adult and proceeds to seek out a host for the third time. An adult female, once engorged, leaves the host to lay her eggs, after which she will die. Typically, each female lays between 1,000 and 3,000 eggs. The eggs incubate for 19 to 60 days, depending on the season, and hatch to begin the life cycle once again.