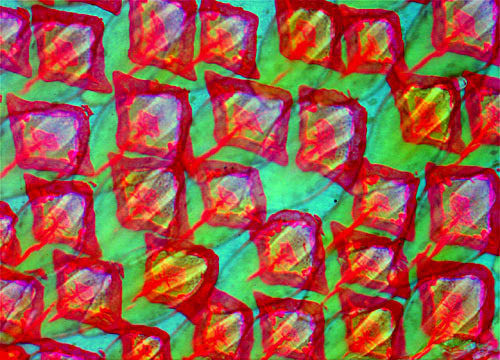 Scales are small plates that form part of the skin of certain animals. They provide protection from the environment and from predators. Sharks have placoid scales, bony, spiny projections with an enamel-like covering. These scales have the same structure as their teeth, and are also referred to as dermal denticles (dermal=skin, denticle=teeth). These denticles are slanted toward the tail of the shark and help direct the flow of water around the shark's body, reducing friction so it can swim with less effort. Stroking a shark from head to tail, its skin feels smooth to the touch, but stroking it from tail to head, the skin feels rough as sandpaper. Shark's skin has, in fact, been used as sandpaper in some countries for many centuries. A shark can also inflict wounds on potential prey by breaking the creature's skin with its scales. Like teeth, the shape of the scales varies among shark species and can be used to identify them.