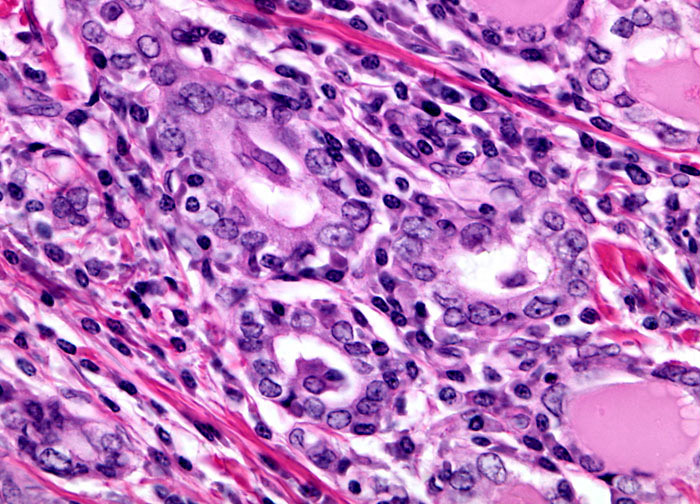 Hashimoto’s disease is an autoimmune disorder first described in 1912 by the Japanese physician Hashimoto Hakaru. The disorder is centered in the thyroid gland, an endocrine gland located beneath the larynx in the throat that secretes a number of different hormones that are chiefly involved in metabolism and growth. Many individuals who have Hashimoto’s disease do not display symptoms, though testing of their blood may indicate that the thyroid hormones in their system are imbalanced. In others, goiter and other symptoms that are associated with hypothyroidism, such as fatigue, weakness, weight gain, hair loss, dry skin, and intolerance to cold, develop very gradually. In such cases, the goiter is caused by the infiltration of the thyroid by lymphocytes, which begin to slowly damage the gland, leading to the development of scar tissue and decreased functionality of the thyroid. Occasionally Hashimoto’s disease will improve spontaneously without treatment, but oftentimes hormone therapy is necessary to provide relief. Surgery may also be recommended in some cases, primarily when goiter development has progressed so far that the growth is unusually large.