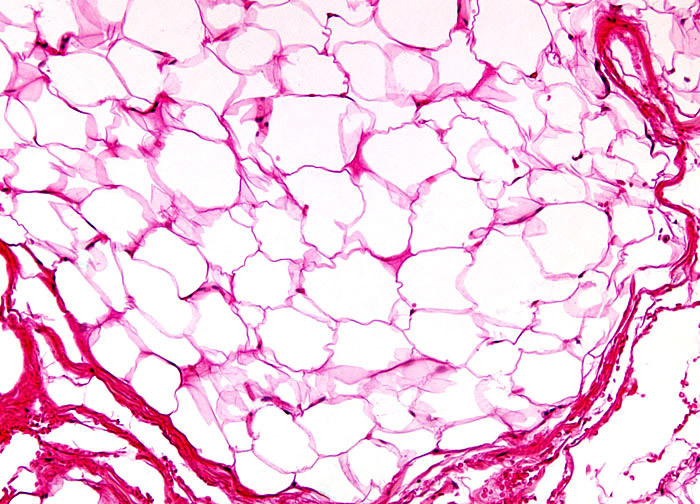 Lipomas are benign fatty tumors usually located in subcutaneous tissues, though they may also occur in other locations, such as the internal organs and the internal auditory canal. The masses are comprised primarily of mature adipocytes, which are generally surrounded by a fibrous capsule that makes them easily distinguishable from surrounding tissues. In such cases, the tumors have a doughy feel and can easily be moved around under the surface of the skin. Occasionally the fat cells of a lipoma will extend out into surrounding tissues, making the tumor significantly less movable. When this extension of adipocytes involves muscle, the tumor is considered a lipoma variant known as an intramuscular lipoma or infiltrating lipoma. Other notable variants include angiolipoma, which is a painful form of the tumor with its own vasculature, adenolipoma, which is distinguished by eccrine sweat glands among the adipocytes, and pleomorphic lipoma, a tumor characterized by giant multinucleated cells intermixed with the normal fat cells.