Robotic Microscopy with the Nikon Ti2 for High-Content Analysis Applications

Check out our new application note in Nature Methods discussing how the Nikon Ti2 inverted research microscope is ideally suited to high content imaging applications. The unprecedented 25 mm field of view of the Ti2 (camera port) provides about a two-fold improvement in imaging area over its predecessor, drastically increasing system throughput and speeding up discovery.

We hope everybody is excited about the upcoming The American Society for Cell Biology annual meeting being held at San Francisco’s Moscone Center. Please join us at Booth 623 from December 4-6 to see our new Ti2 inverted microscope and other exciting imaging solutions.

Researchers from UCSF and the University of Illinois at Urbana-Champaign have succeeded in pausing the development of mouse blastocysts for up to one month via inhibition of the mTOR protein. Briefly paused embryos retained the ability to develop normally. This strategy also worked on cultured embryonic stem cells, inducing a pluripotent state that can last for weeks in vivo. Their research has implications in a variety of fields, including ageing, cancer, assisted reproduction, and more.

New research published in Nature Methods details the development of a bright new red fluorescent protein – mScarlet – with an excitation maximum of 569 nm and emission maximum of 594 nm. mScarlet is highly monomeric and about 3.5 times brighter than mCherry. Additionally, mScarlet has a pKa of 5.3, making it tolerant of acidic environments.

We hope that everybody had a wonderful time at this year’s Society for Neuroscience 2016 Annual Meeting! If you didn’t get a chance to see our new inverted Ti2 microscope in person, check the link to see what you missed.

Microtubule Organization is Determined by the Shape of Epithelial Cells

New research published in Nature Biotechnology details a method for optimizing spatial resolution during acquisition of light sheet microscopy data. An automated program corrects for mismatches between the plane of light sheet illumination and that imaged by the detection objective in real time, demonstrated by imaging of entire zebrafish and fly embryos. Imaging was performed using a Nikon 16x water-dipping objective.

Lasers and… anti-lasers? Researchers at Lawrence Berkeley National Laboratory have constructed a laser that also acts as an anti-laser. A laser emits coherent light - anti-lasers absorb coherent light. A single device that does both may seem paradoxical, but the authors believe the technology may be used to make high sensitivity light detectors, or even photonic integrated circuits. To learn more check out the Phys.org article.

See More Than Before with Nikon's Newest Inverted Microscope System

Researchers at ETH Zürich have published a new method in Nature Protocols for axially confined photoconversion of the fluorescent protein Dendra2 in single cells – demonstrating the concept in developing zebrafish embryos. This method uses a specialized filter plate and the process of ‘primed conversion’ to convert Dendra2 to a red emitting form using 488 nm and 730 nm beams that intersect only at a common focal point.

Nikon at the Society for Neuroscience 2016 Annual Meeting

Are you attending the Society for Neuroscience 2016 Annual Meeting? If so, come find Nikon at Booth #2513 from November 13-16! Our latest imaging solutions will be on display, and all will be revealed...

We would like to extend our thanks to everybody who attended the Nikon Imaging Center at Harvard Medical School 15th Anniversary Symposium. Here's to the next 15 years!

A new open-access research article in the journal Light: Science & Applications details a new Fluorescence Polarization Microscope (FPM) design for super-resolution imaging of the dipole orientations of overlapping single fluorophores in sub-diffraction limited volumes. Using this new technique, they’ve demonstrated that the dipole of actin monomers is perpendicular to the actin filament, and radially distributed in septin complexes in live yeast cells. Imaging was performed on a Nikon Ti-E motorized inverted research microscope.

It is well known that the human brain has a limited ability to compensate for nerve cell loss, but new research shows that embryonic neurons transplanted into the visual cortex of adult mice can mature into pyramidal cells – restoring several lost functions. Check out the Phys.org article to learn more. 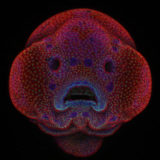 Many people in the microscopy world are familiar with quantum dots – semiconductor nanocrystals with well-defined light emitting properties – as fluorescent labels. Researchers at Los Alamos National Laboratory have demonstrated how quantum dot-based solar panels can be scaled up for practical use, large enough to be used as a building window when used in luminescent solar concentrators (LSC). Quantum dots in LSCs absorb photons and emit light at a lower energy, guided by total internal reflection to the edges of the device, where they are collected by photovoltaic cells.

A team of researchers at the Wyss Institute for Biologically Inspired Engineering at Harvard realized a major milestone in 3D bioprinting with the construction of a working proximal tubule – a key component of kidney nephrons – made of human epithelial cells. They hope to use these engineered tubules as models of human kidney function, providing a highly relevant system for pre-clinical drug response testing.